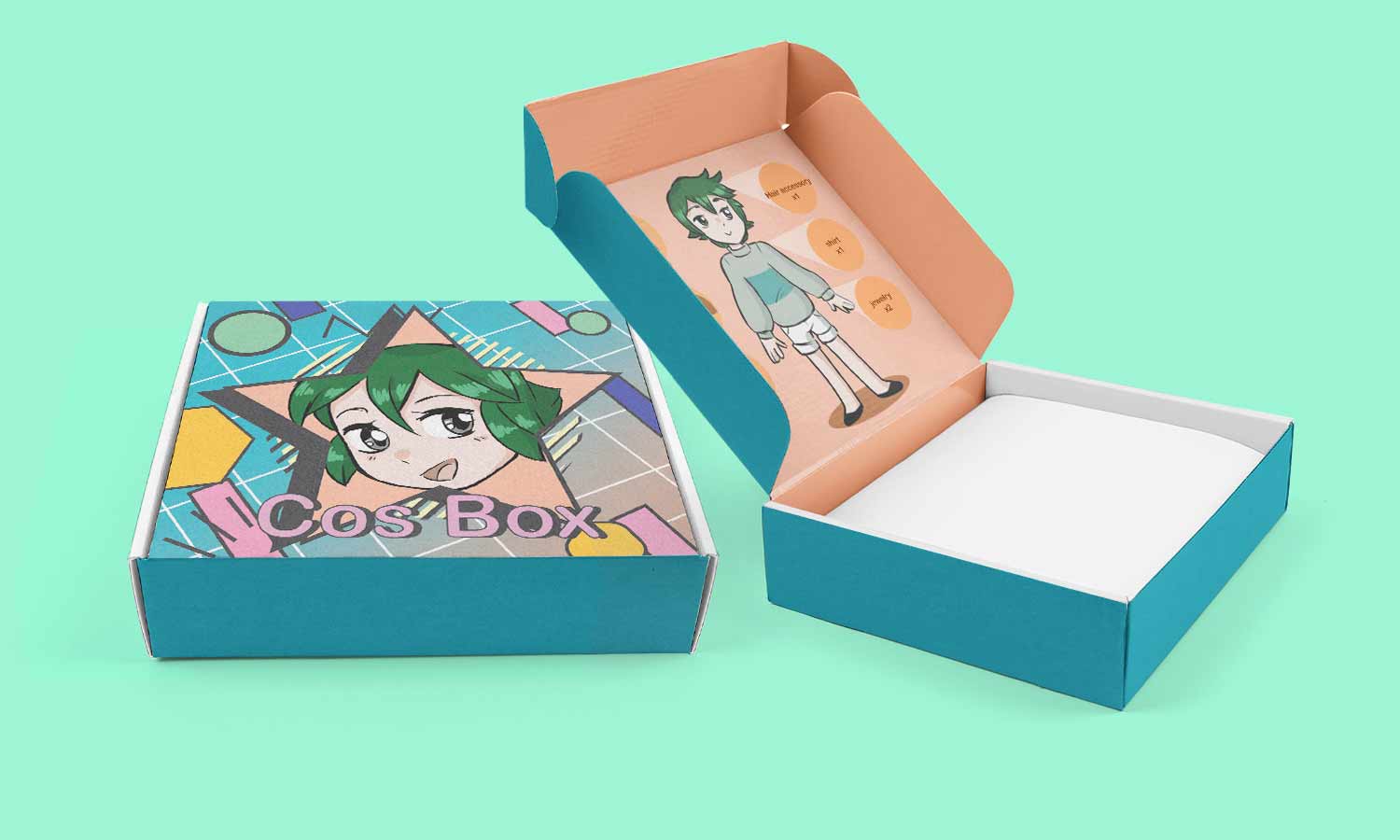 From a randomized generator I was assigned my own persona to create a design specifically around them. I ended up with a 9 year old boy from Texas who loves to cosplay, has a loud and energetic personality, and lives in the early 90’s. To help cater to his love of cosplay and his personality, I decided a good thing to design for him would be a subscription system for him to receive new cosplay items and merchandise monthly.

I really wanted to combine American 90s pop as well as Japanese city pop in the packaging for a loud playful aesthetic that would reflect my persona’s taste and personality. I made sure early on to include some kind of face/mascot for the brand and did research on 90’s anime art styles and tried to mimic the style in my sketches through the elongated figures and large cartoon eyes.

In my first iteration I focused heavily on deciding on colors, style, patterns, what the inside of the box would look like, and seeing how my sketches of my mascot would interact with the final box.

In the second iteration the top side of the box’s design is finished, the mascot’s design is fully expanded upon and the digital art of them is placed in for the sketches. In this critique it was decided to make adjustments to the inside of the box to make it flow better by removing some of the text and changing the style of the arrows.

Focusing on making an app design for an audience that cosplays, I thought making a DIY app would be appropriate to make since many cosplayers prefer making their own props and accessories. Early app iterations mostly focused on the functionality of the app as well as different features that could be included. I wanted to tie in the original 90’s pop design used in the box somewhere in the app design and initially tried to implement it in loud graphic backgrounds of the app.

After stepping away from designing the app and taking inspiration from the direction I was taking my DIY website I decided to restart the entire app and landed on a simplified version of the original design with more white space, better organization of the copy and still incorporating the original 90’s pop design in the bottom navigation bar of the app as a homage to the design on the original box art.

In early iterations I played around with the color palette especially with the oranges and teals trying to find ways to help create a cohesive visual layout through the use of color and the patterned background used throughout my other deliverables.

In the final website prototype I made adjustments to the final color palette so that it went with the final app design more as well as changing the copy in the descriptions to a dark grey to follow the typical designs of website design. I also incorporated little icons of CosBox’s mascot Yoshi throughout the website as added details to help direct the viewer’s attention.

After partial work has been completed on the website as well as the app designs, we has an added layer to the project deliverables this being an outdoor billboard as well as the inclusion of 4 website ads of varying sizes. These were interesting to work with, especially the website ads since they just varied from being extremely large designs to very small ones that required the design to be moved and displayed in different ways while still maintaining easy readability.

As part of this project we had one more deliverable that was left for us to choose ourselves for this I wanted to challenge myself and design something that I haven’t made before. Since conventions and convention spaces are a huge thing in the cosplay community I designed a branded convention space that would be used to advertise and sell cosplay subscription boxes.