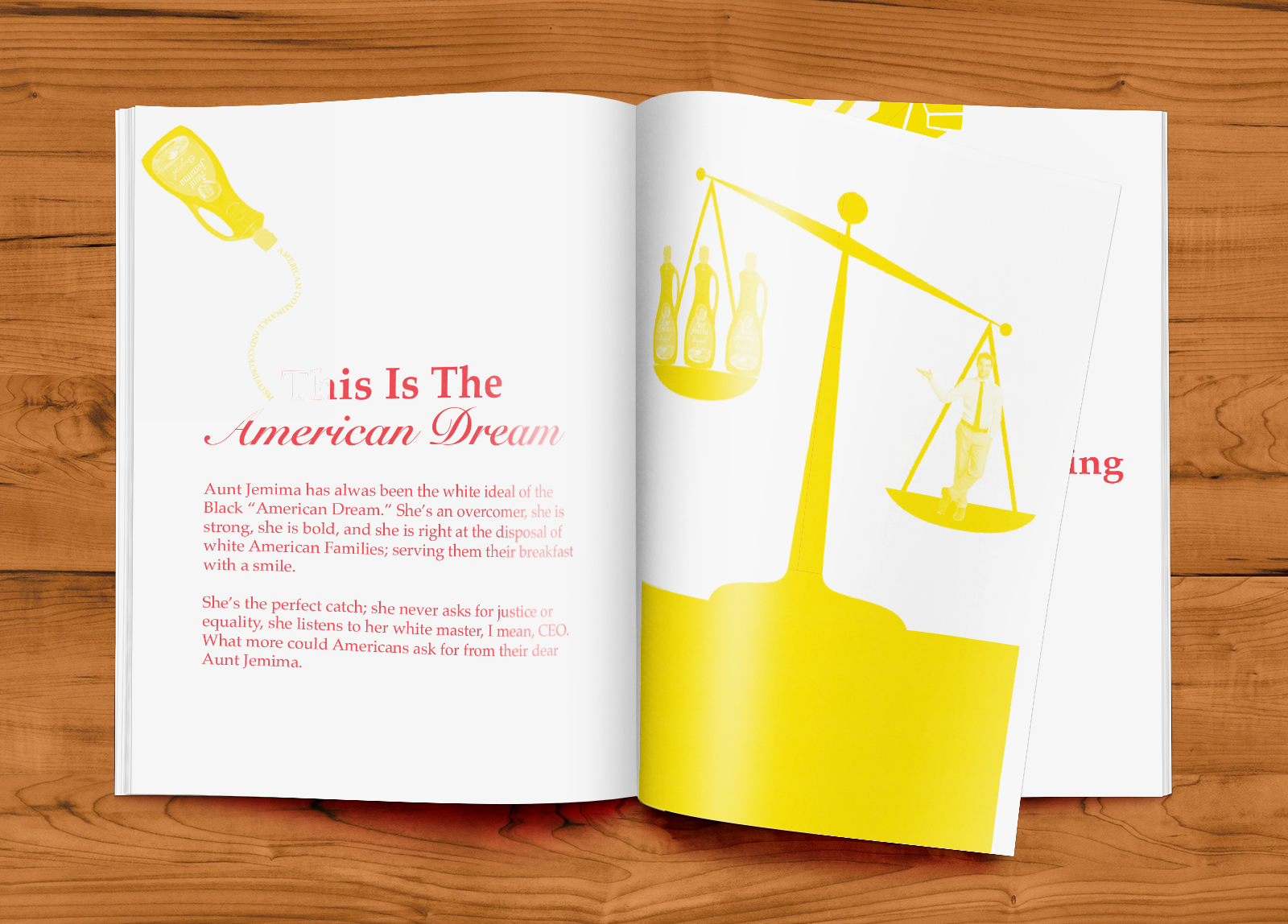 For this project, we were assigned a company as well as a group, and we were charged to make a “zine” that appropriated the historical, cultural, and underlying nuances of the brand at hand. For the group that I was a part of–which included undergraduate students Lela, Elijah and myself, as well as a graduate student, Kim–we were assigned the brand “Aunt Jemima.” We were asked to then investigate the history as well as the way that the brand figure of Aunt Jemima, a slavery era “Mammy,” had been appropriated to fit and serve the dominant cultural narrative of generational white male supremacy. The group that I was in approached this subject and this project in a delicate way because of the sensitive content that we were presented with in our research. The goal that we wanted to reach for in the creation of our zine was representation of African American pain, as well as recognition of the travesties that the dominant culture has been committing against the image of African Americans, specifically African American women, for generations.

The most interesting insight that I found from doing this project was just how deeply ingrained racism and racist imagery is imbedded in American society, and how these subtle racist cues feed into our implicit biases as the dominant culture. If there are racist subliminal messages on something as simple as our pancake mixes and syrups, how much more so is it imbedded into the American human psyche?

For this project, our group members were included, as well as others such as African American activists and Authors that we represented through our research and execution of our project. We did not necessarily have any experts on the topic to verbally communicate and collaborate with, but we were met with a lot of great data and perspectives through the academic research that we conducted. Each of the members in our group, including myself, contributed to the overall success of our Zine by conducting secondary research through the library academic journal sources that we found on JSTOR as well as creating a spread of the zine which was then placed into our final composition. The audience of our zine was those who were young to middle aged and seeking resources on the history of racist imagery in order to educate themselves; much like someone who may visit the national underground railroad freedom center in Cincinnati. The purpose of our zine was two fold; on one hand we wanted for African Americans to feel heard and represented, and on the other hand we wanted to educate those who are unaware of these subtle racist images in the brands that we know and love.

We did a lot of academic research in order to come to our design solutions. We found many academic articles on JSTOR which we accessed through the Miami OH Libraries database search. This helped us to grasp a greater understanding of how to use the library resources at hand. Most all of the research that we conducted was secondary academic research in which we read journal articles, historical documents, and peer evaluated published works. We found article upon article, many written by black academic authors, about the untold history of the brand of “Aunt Jemima” as well as the implications of the stereotypical “black mammy” on African American’s today. We learned that the reason that black mammy imagery was and is still so prevalent is because of the roots of white supremacy in America. A mammy was a black woman who worked for a white family and nursed their children. The mammy served on the mother of the house as well as the man of the house hand and foot, and was seen basically as a house slave. This stereotype carried over from the slavery era even in to today where mammy imagery can be seen on the front of large corporate brands such as Aunt Jemima. With all of this knowledge in mind, we approached our design solutions with the mindset of trying to re-appropriate Aunt Jemima as a symbol of black history and the historic black cultural narrative and how that has affected black culture. We used all of this research to empathize with the non dominant culture that had been so unjustly treated, and stereotyped for many years only to serve the purpose of the dominant culture.

In order to properly approach our design we used our research to decide on a direction that we wanted to take our project. We decided that the research material and data that we collected was too disheartening to be represented literally, as we did not think that this would get across just how pressing this subject was. We decided that the best way to pay homage to where Aunt Jemima was and has been was to use satirical imagery to convey the content of our research. We subverted imagery to have a deeper meaning than just the surface level pancake box or syrup bottle. It was important to us that the images that we used conveyed this sense of a deeper meaning, because after all that is exactly the story behind the smiling character of Aunt Jemima. On the surface she looks to be a happy business owner or cook whereas the true history behind her smiling face is one of oppression.

The feedback that I received from the critiques was that we should use some of the imagery, such as the BLM Syrup bottle as a possible pattern. Another insightful critique was that our professor, Zack Tucker, found the scales of justice imagery very interesting and impactful, so when I approached my final design solutions, I wanted to make that a dominant feature in the composition. We also used a google jam-board in order to organize our ideas into a final direction.

I would say that the successful parts of our project were that we re-appropriated the brand character of Aunt Jemima to serve the purpose of shedding light on the injustices that something as simple as pancake batter and syrup has caused in the minds of Americans. Our project was important because it notes just how ingrained the idea of serving the dominant culture is in the minds of Americans, even if that means that a group of people are hurt in the process. The project guidelines allowed us to have just enough creative freedom to create what we believe to be a satirical piece that re-appropriates Aunt Jemima in a light that is understandably trying to level the stereotypes and injustices that have been perpetuated against African Americans for generations. I think that something that people can practically take away from this project is that we are oftentimes blissfully unaware of how the things that we are consuming, whether that be media, news, or even physically consuming like pancake batter, can be oppressing a minority group or promoting the dominant culture. We can each take into account the things that we are consuming; images, news, food, podcasts, etc, and ask ourselves who is this serving, and who is this not serving or even oppressing.

As far as the Power Audit Worksheet is concerned, I do believe that our project broke many of the barriers on the Matrix of Domination. We were able to successfully include many non dominant groups. Our brand character, Aunt Jemima, helped us include African Americans, those with non European Heritage, Black/POC, as well as females fairly easily. Other groups that we tried to include throughout our design choices were non literate people through our excessive use of imagery, as well as Working class and poor people because of the brand at hand–a low/middle class pancake mix. I do not believe that we included all of the non dominant groups of people, but we did include quite a large portion of them through our project. I think that in the future we could use the gaps in the matrix of domination to make our designs even more inclusive.

Undergraduate Student
Graduation Year: 2022
http://haileypetersen.com
I am an undergraduate student in the communication design program at Miami University in Oxford, Ohio. I have worked for the design agency Bitstorm Connect in Dayton Ohio as a freelance designer, and I also own and operate two small businesses. 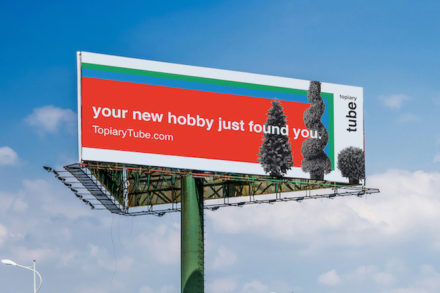 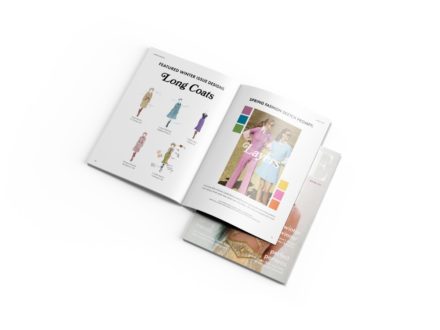